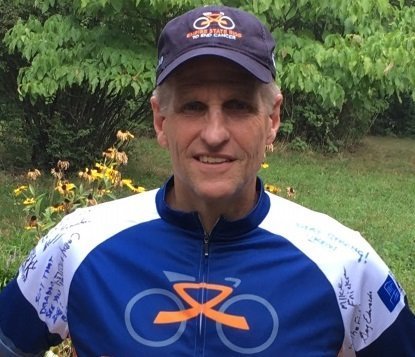 There are million different reasons to participate in the Empire State Ride. For Rick Bartlett, there is one that stands out. The avid cyclist was diagnosed with prostate cancer in the beginning of 2017. Due to early detection and appropriate treatment, he was able to declare himself cancer free by the end of 2017. This experience made Rick realize the massive lack of awareness about pre-testing and preventive measures that could save lives.
So, he decided to sign up for the Empire State Ride and use his platform to spread awareness about the importance of check-ups and early testing for prostate cancer.
Rick’s connection with the Empire State Ride goes back even further then just his participation as a 2018 Rider. In 2016, Rick joined the Empire State Ride support staff as a luggage truck driver. During the seven-day journey, Rick said he enjoyed meeting everyone and seeing the beautiful New York State scenery. However, he was a little jealous of how much fun the riders were having. In that moment, he decided that he wanted to participate in 2017.
His cancer diagnosis stopped his 2017 plans in its track. But, now that he’s beaten cancer, he’s ready for the 2018 ride. Being able to participate in such a challenging and strenuous adventure only one year after his diagnosis means a lot to him and shows him that he can still do the things that he loves.
“I can still do the things that I love and I have overcome the little bump in the road, as my doctor called it,” said Rick. “Not everybody is as lucky as me but to share this common bond about going through the battle with cancer is unique and that is what the ride really means to me.”
Rick not only craves challenges but he also loves supporting other people as they overcome challenges, as well. He is most looking forward to getting to know a group of wonderful people, biking through scenic New York State and, last but not least, the food.
“I love to eat delicious food and I love to ride,” he said. “With the Empire State Ride I got both. I don’t think it can get any better than that!”
Join Rick for some great riding and good eats on the 2018 Empire State Ride – register today! 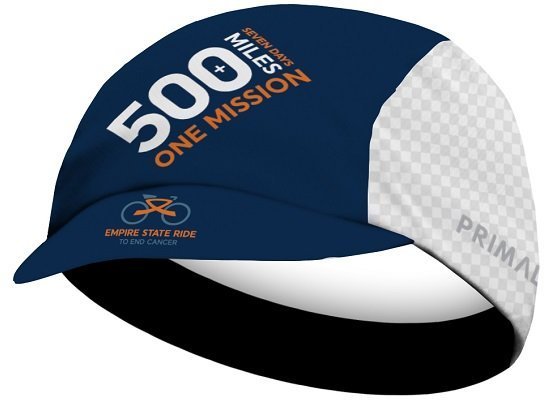 While fundraising is thrilling, it can also be quite challenging. Our Empire State Riders are champions when it comes to raising funds. We appreciate all the time, effort and energy they put into fundraising to change the state of cancer research for good.

Because we’re so grateful, we wanted to offer you Fundraising Rewards! When you reach a fundraising milestone, you’ll receive a special reward.

The team behind the Empire State Ride really appreciates all the efforts you put into fundraising. You’re impacting the future of cancer research and saving lives. The funds raised by our riders support cutting-edge cancer research at the America’s first cancer center, Roswell Park Comprehensive Cancer Center, which provides treatment and care for more than 36,000 patients from 46 states and three foreign countries each year. Thank you! 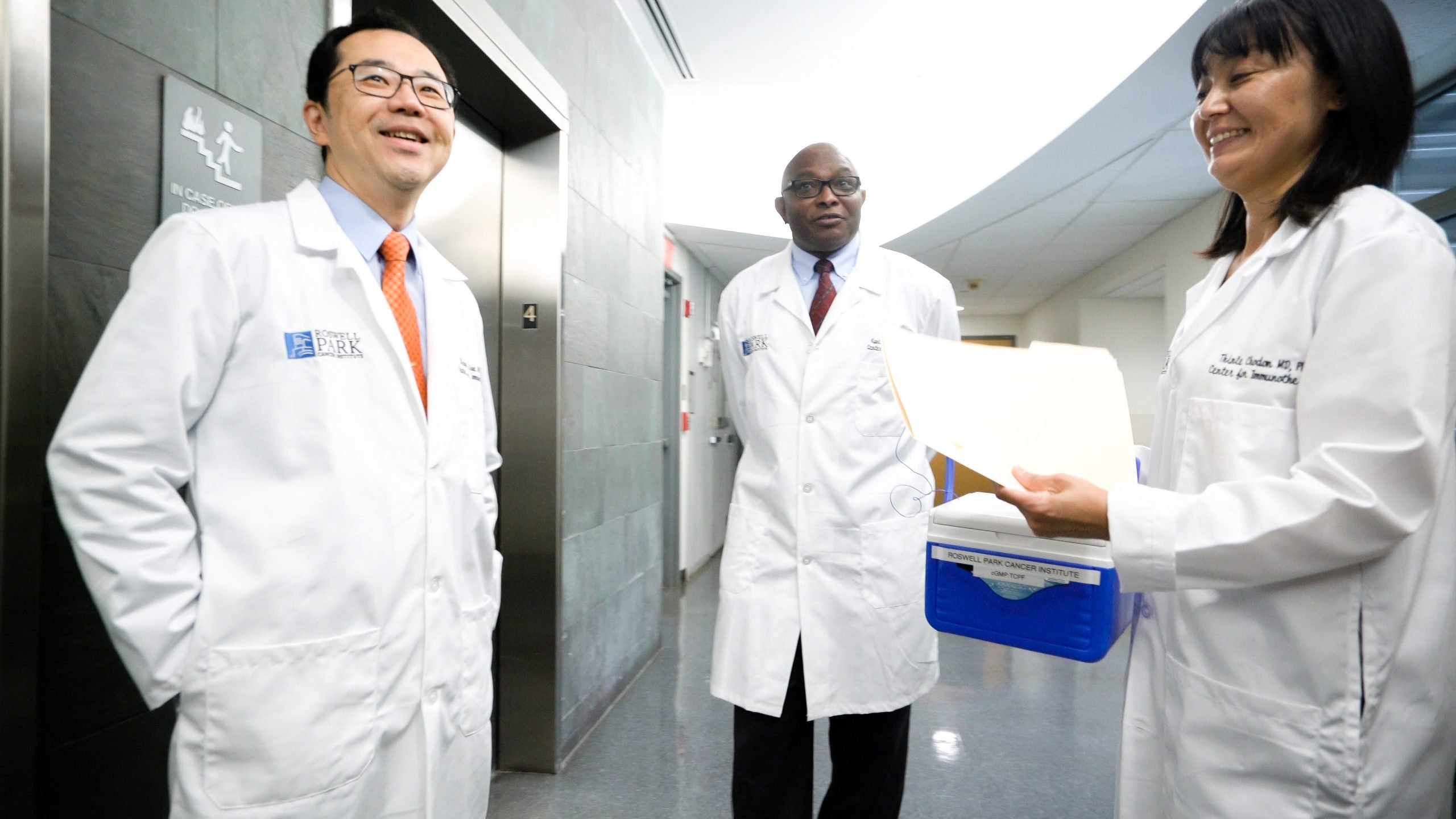 There’s a new strategy being tested at Roswell Park Comprehensive Cancer Center that delivers a two-pronged attack against cancer cells by super-charging the immune system. Developed at Roswell Park, this therapy is being studied through a phase 1 clinical trial.
“Cancer cells are really smart,” observes Richard Koya, MD, PhD. “Chemotherapy, radiotherapy, surgery and even some immunotherapies may have some effect initially, but cancer cells have a way to evade them, to be resistant and grow back. That’s why it’s so difficult to treat cancer.”
As Associate Director of the Center for Immunotherapy and Director of the Vector Development and Production Facility, Dr. Koya spends a lot of time thinking about ways to help the human immune system outsmart cancer. He developed this new immunotherapy with Kunle Odunsi, MD, PhD, FRCOG, FACOG, Deputy Director of Roswell Park and Executive Director of the Center for Immunotherapy.
“What we see over and over in trying to treat some of the most aggressive and intractable cancers, including many lung, brain, ovarian, breast, melanoma and sarcoma tumors, is that the tumor fights back,” says Dr. Odunsi. “We have identified a major pathway by which these kinds of cells try to disable immune cells, and formulated a strategy for exploiting that weakness.”

In a process similar to donating blood, a patient’s T lymphocytes (T cells) are collected and sent over to Roswell Park’s Center for Immunotherapy.
There, they are armed with receptors that enable the T cells to hunt down and destroy specific tumor cells. They’re also given a second gene to protect the T cells from attack by a protein tumors use for protection. Then, the T cells are infused back into the patient and get to work fighting cancer.
“Nobody else is doing the combination of these two different elements in the same platform anywhere in the United States or even on the planet,” says Dr. Koya.
This trial was made possible thanks to Roswell Park donations and funding from the National Institutes of Health. 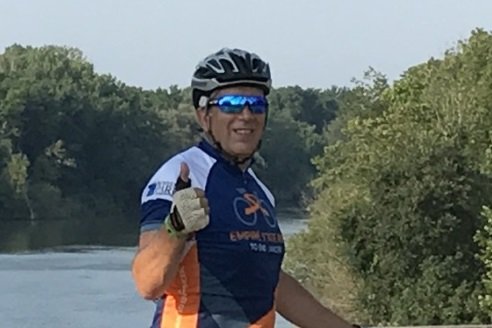 In 2017, Peter Vollmer lost his cousin to throat cancer. On his way home from the funeral, he heard a radio commercial for the Empire State Ride. Peter felt compelled to participate in honor of all of those in his life affected by cancer. So, he signed up for the 500+ mile adventure across New York State.
Peter had never done anything like the Empire State Ride before, even though he’s an active cyclist. Despite that, his first ride in 2017 was magnificent and nothing like he’d ever experienced before. After the ride 2017, he knew he had to participate in 2018 and he can barely contain his excitement.
“Even though I was riding with 100 fellow riders, I never felt crowded,” Peter said. “Quite the opposite because all the people on the ride felt like family members that give each other enough personal space while simultaneously supporting each other.
“This event restored my faith in humanity — 100 people that barely knew each other came together. At the end of our ride, we were embracing one another. We had all come together and did something for people suffering from cancer.”
Peter enjoyed his time so much on the 2017 Empire State Ride that he even wrote a first-hand account of the ride. You can read Peter’s retelling of the 2017 ride here.
He’s looking forward to this year’s ride and is excited to add a personal challenge. After crossing the finish line in Niagara Falls, he plans to turn his bike back around and pedal home to Long Island! His wife thinks he’s crazy but he seems very determined to follow through with his adventurous plan.
According to Peter, we all need a little adventure in our life, and the Empire State Ride is a fantastic experience for both the mind and body.  If you like adventures and want to experience something that you will never forget, register today. Join Peter and more than 120 other riders on the Empire State Ride to end cancer!