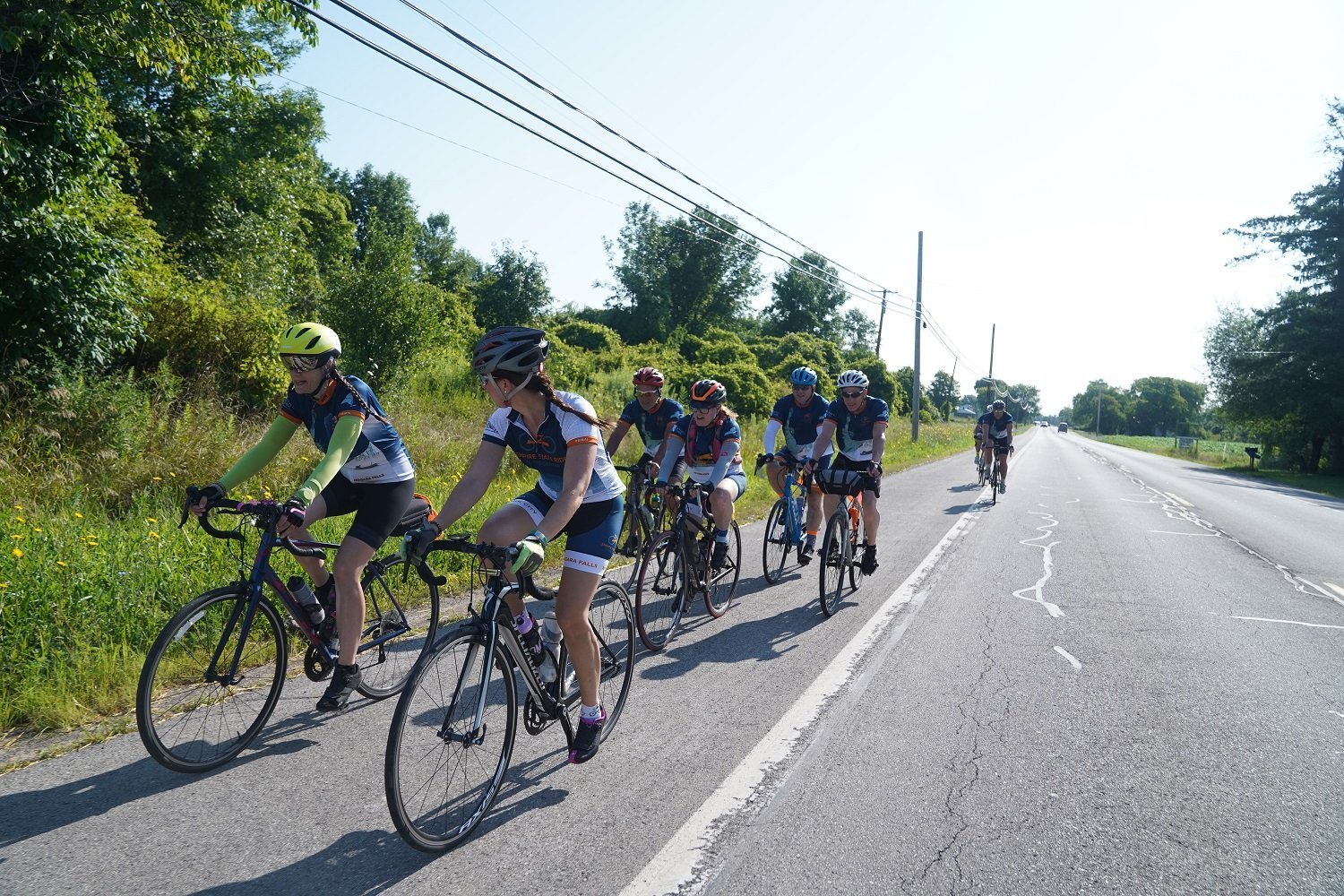 The Statue of Liberty​

It’s quite a feeling riding the Staten Island Ferry and seeing Lady Liberty pass by. A symbol of determination, hope and freedom, it’s the perfect sight to see before officially starting the Empire State Ride challenge.

NYC. Big Apple. The City That Never Sleeps. Few cities are as iconic as the one and only New York City and on the Empire State Ride, you get to take in these views all from your bike. The people, the hustle and bustle, the smell of different street foods, the sounds of cars honking – it’s all so quintessential New York. And it’s even more memorable seeing it all while cruising around with 200 other cyclists all decked out in the official #ESR20 jersey.

Walkway Over The Hudson

Did you know you can ride you bike across the Hudson River? Thanks to the Walkway Over the Hudson, you’ll be cruising along the longest elevated pedestrian bridge in Upstate New York on Day 2. The sights are incredible and the river makes the perfect backdrop for a picture with all your new friends.

Lush greenery. Rolling hills. Blue skies. Quaint towns. There is so much to see as you ride throughout the countryside of New York State and there’s always time to stop and take it all in.

You can’t cross New York State without stopping in Albany, the capital of the state. The Empire State Ride has a rest stop right outside the capitol building – it’s the perfect place to reset, drink something cold and take it all in.

It’s not every day you get to see one of the wonders of the world. But on the Empire State Ride, you do. The conclusion of the adventure ends in Niagara Falls, New York, and it’s quite a sight. It’s hard to put into words what taking that group picture in front of the roaring Falls feels like. Plus, nothing beats those over-the-head bike shots – an ESR staple.

The Empire State Ride is an adventure from start to finish. Get ready to see some iconic and unexpectedly beautiful New York views all while advancing the future of cancer research. 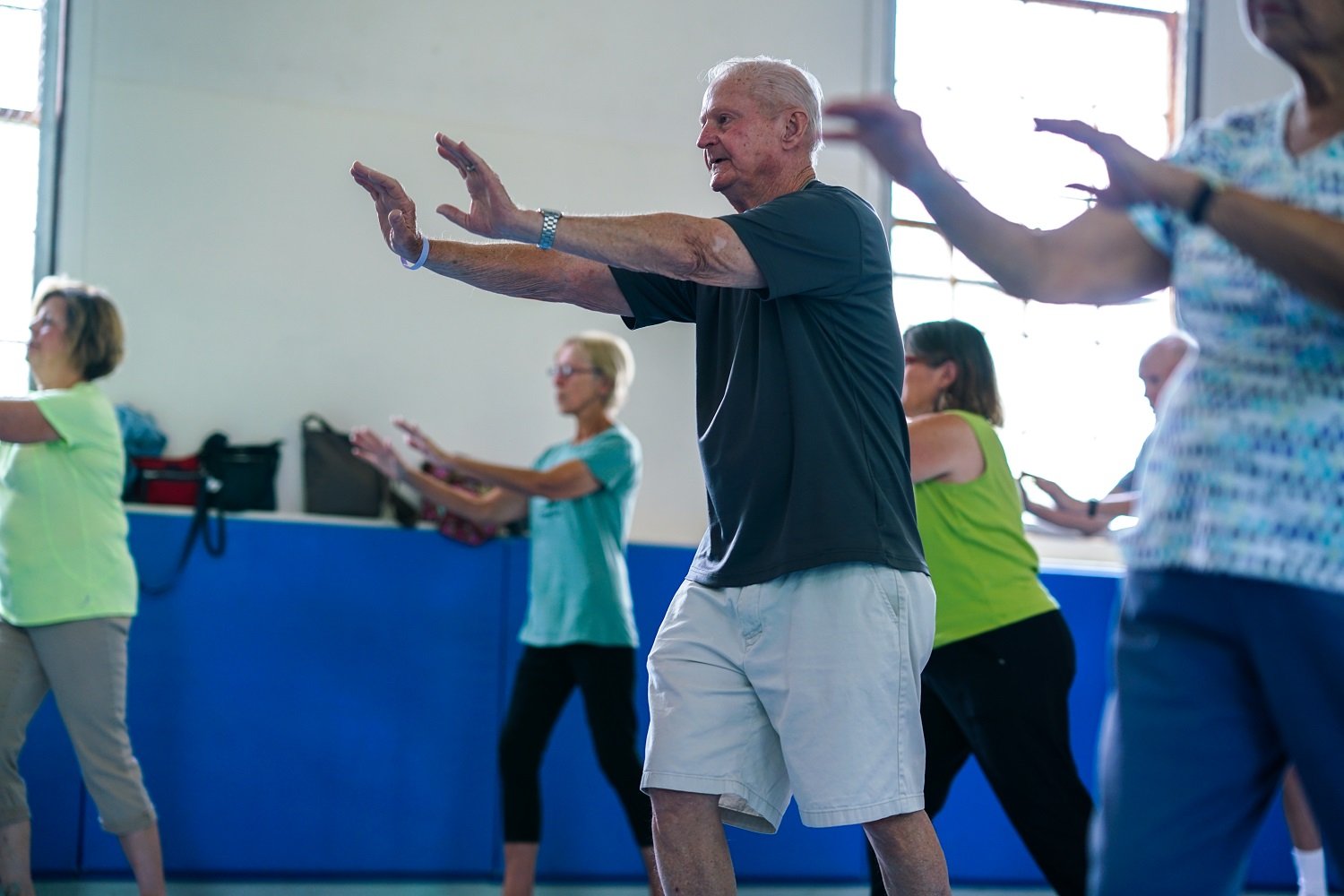 Jerry walks out of his tai chi class in the senior center feeling relaxed and refreshed. The 76-year-old widower keeps an activity level that beats most people half his age: golf, kayaking, line dancing, total body workouts and tai chi, along with other classes and outings with Grand Island’s Golden Age Center. And he does this while living with COPD
and lung cancer.

Jerry’s relationship with Roswell Park began in 2008 when he was diagnosed with esophageal cancer. After radiation, chemo and surgery to remove 8 inches of his esophagus, he was declared cancer free. But because he worked for 33 years in a coal-fired electricity plant and had been a smoker till age 50, his doctors knew too well that this might not be the end of his cancer story, and kept him under close monitoring.

Unfortunately, they were right. In 2018, one of his routine screenings showed lung cancer, and it had already metastasized into his left hip. Even with that, Jerry’s outlook was positive.

“I’ve been through it once before, and I’m an affirmative type of person. I just said, OK, let’s do something about this. Let’s get at it, whatever we had to do.”

They began treatment with chemo, which left him with a rash, fatigue and no hair. But then he learned he qualified for the CIMAvax-EGF clinical trial taking place at Roswell Park.

Clinical Trials at Roswell Park Made Possible by Donor Support

CIMAvax is a lung cancer vaccine developed at the Center for Immunology in Havana, Cuba. It works by targeting a growth factor in the blood — called EGF — that cancer cells need to survive. CIMAvax essentially starves the cancer by depleting EGF.

Roswell Park has an exclusive partnership with Cuba, meaning it’s the only place in the U.S. where these clinical trials are available. Donor giving has played a huge part in making that possible.

“We completed phase I of the clinical trial around summer 2018. In September 2018, we started phase II to verify our findings in phase I formally in a larger group of patients,” says Dr. Grace Dy, Chief of Thoracic Oncology, Jerry’s doctor and principal investigator on the trial. “When chemotherapy stopped working for Jerry, he was generous with his time in participating in this clinical trial. He’s been on the CIMAvax vaccine for over a year now, and we’re very pleased his cancer remains under control and that he’s able to maintain a good quality of life.”

“This vaccine could be a game-changer,” says Dr. Kelvin Lee, the Jacobs Family Endowed Chair in Immunology, who initiated the relationship with Cuba that brought the vaccine to Roswell Park.

“It could impact hundreds of thousands of patients in the United States, and potentially millions of individuals worldwide.”

It doesn’t stop at lung cancer, either. EGF is present in many kinds of cancer, so CIMAvax has the potential to help many patients. There’s another exciting possibility, too: prevention. Doctors have found that EGF is active in the lungs of some people who are at high risk for lung cancer but haven’t developed it yet, meaning CIMAvax could be used to stop it from ever growing in the first place. Further clinical trials will help us find out for sure.

What does it mean to Jerry that this clinical trial was available to him?

“Oh, boy, it means the world to me. It’s so much easier to go through immunotherapy than chemotherapy. Chemotherapy kind of tears you up a little bit. CIMAvax gave me a more positive outlook.”

At his last scan, his cancer wasn’t shrinking, but it wasn’t growing, either, and that sounds great to him.

“Because of Roswell Park, I am alive,” he says. He has a way of keeping things short and simple. “I have a much better quality of life. I wouldn’t be here now if it wasn’t for the CIMAvax, and CIMAvax wouldn’t be here without the donors. Thank you very much!”

In addition to the activities that keep him busy each week, this spring Jerry surprised his daughter in California for her birthday; this summer he took a trip to Long Island with his son and his other daughter; and this fall he’ll be visiting an old friend in Ohio and traveling to Nashville with the senior center.

“I’d also like to get some more kayaking in and biking,” he smiles.