Passion and Kindness Fuel This Fundraiser 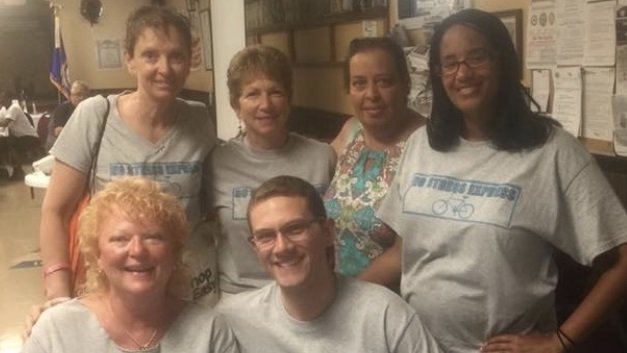 Janice Hetrick has passion – loads of it. It seems anything she dives into receives her passion, boldness and dedication in their entirety. Her participation in the Empire State Ride is no different. This will be her second year riding the 500+ mile adventure, and she’s a champion fundraiser, putting in an incredible amount of effort.

As a breast cancer survivor, Janice has participated in over 180 events since her battle. From 5Ks to half-marathons to Tough Mudders, she’s done it all. When a friend originally suggested the Empire State Ride, Janice said no, but quickly changed her mind. Once she signed up, she got to work fundraising.
She decided to hold a basket raffle, so she reached out to people she’d met at those 180 events. The response she got was astounding. Janice received 180 baskets and more than 100 gift cards. To spread the word about her event, she contacted friends, businesses she visited frequently, work associates and more. She held the raffle at a gym where she knew the owner. Janice used her network strategically and to her advantage.
And it worked! Janice had more than 150 people attend her event. Food was donated by Daddio’s Pizza, Tim Hortons and Danny’s Restaurant. She raised more than $7,200. She ended up donating the fundraising minimum of $3,500 to a fellow Empire State Rider because that’s just the type of person Janice is.
While it is a lot of work, Janice said she would do it all over again because “it’s an event where people come together for a good cause.”

And do it again she did. This year, Janice has various fundraisers set up at Chipotle, Orangetheory, Lean Nation and Buffalo Collective. She also hosted a meat raffle in June at an American Legion post. The ticket price was $10, which included entry, pizza and pop. There were 40 basket raffle items, 30 gift cards and the door prize – a wheelbarrow filled with bubbly.
To spread the word about her raffle, she posted it pretty much everywhere:

Once again, her results were incredible. She raised more than $3,400 at the raffle. Additionally, her Chipotle fundraiser raised $450 (she has not collected her donations yet from Lean Nation or Buffalo Collective).

The craziest thing about Janice’s efforts this year is she already had made her fundraising minimum before all these fundraisers. Why keep going?
The extra money isn’t going to her, but rather to help her friends meet the minimum for the Empire State Ride.
“I was so happy because now my friends and I can all ride together.”
Her passion and kindness are truly helping change the world for the better.