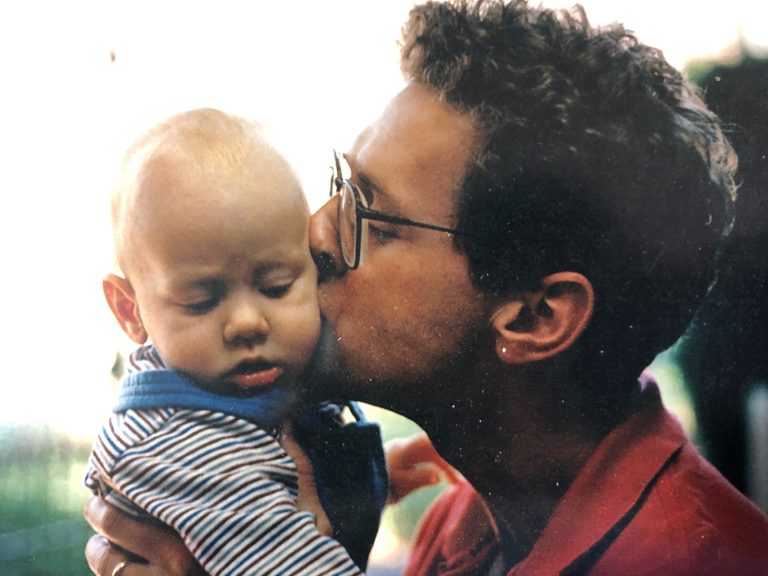 “I think the most important lesson he taught me is to face your life head on,” Harry McNamara says about his dad. “When things went wrong, even as they took a turn for the worse in his illness, he plowed ahead. I think it was in his nature to never shy away from a challenge, but to rise up and face it.”

When you listen to Harry describe his late father, Mike, the word hero comes to mind. Mike is the inspiration behind Harry’s Empire State Ride team with his girlfriend, Kayla — appropriately named Team Mike McNamara — and is one of the many people they both are riding for.

According to Harry, Mike was an amazing man. He grew up outside of Philadelphia in a family of 10 children.

“He was the youngest son, and I think he worked really hard to distinguish himself and make his family proud.”

When Harry was a baby, his family moved to Colorado. The lifestyle of the West really rubbed off on the family of five, and they spent their time together skiing, camping, hiking and road-tripping. Mike was always up for anything, and Harry says he inherited that streak from his dad.

“When we would go out to eat, he would always order the weirdest thing on the menu on purpose — cold beef tendon, squid sushi, pig eyeball. He’d give me a look, and I knew I had to try it, too.”

That adventurous spirit in Mike never dwindled. He relocated to New York City in his 50s and, with his background in childhood education, took a job as Head of School for Hyde Leadership Charter School in the Bronx. Mike took pride in the fact that Hyde brought family and community involvement to students in the South Bronx, one of the poorest neighborhoods in the country. Harry was also living in NYC at the same time and enjoyed showing his dad his favorite restaurants and places to go throughout the city.

Mike also supported his children’s decisions, no matter how different they may have been from his own.

“I was into choir, theater, the arts,” Harry says. “When I wanted to go study music in New York, he never once questioned my choice or how I would make my living. He just supported my decision any way he could.”

According to Harry, Mike’s lymphoma diagnosis was a huge surprise. It was shocking and scary to Harry, as he had always viewed his dad as an invincible hero.

True to his nature, though, Mike’s outlook was good. His first year went well — he responded to his chemotherapy and started recovering. But things took a turn his second year. When he went back for more chemo, complications began. He was chosen for a clinical trial for CAR T therapy, and despite his recovery from that, his tumor kept coming back.

“As things turned dire, we started to have those conversations that no one wants to have with their family members. I’m sure many people reading this know what I mean,” Harry says. “We had a really special Christmas dinner at his apartment on the Upper West Side in 2016. My mom and my siblings came out. We cooked dinner together and shared wine. Shortly after that, he entered the hospital for the last time.”

Harry first learned about the Empire State Ride after a film production truck ran into the lamp post that his bike was locked to. While he was shopping for a replacement at his favorite bike shop, he saw a pamphlet for the ESR, and it piqued his interest.

It wasn’t until a few months ago, when Harry introduced the idea to Kayla, that it became a reality.

“We talked it over for a few months, and I was totally on board from the moment Harry mentioned it,” Kayla says. “We started inserting it into a plan that we’ve been making for the last year. I wanted to make it a real solid plan, so one evening I was feeling super inspired, and I told Harry, ‘Let’s do this. I want to register, and I know it means the world to you and the remembrance of your father. Let’s do it and call it Team Mike McNamara!’ So that’s exactly what we did.”

Currently, the pair has raised $5,755 for Team Mike McNamara.

Even though Kayla never got the chance to meet Mike, she knows “for a fact he was a wonderful man because he raised and mentored the man I love. I really wish I could have met him, but through Harry, his light lives on.”

While their team is named after his dad, Harry and Kayla are riding for others affected by cancer, including Kayla’s aunt and cousin, Harry’s aunt, a longtime friend from Denver and anyone who has lost a loved one to cancer.

They are both excited and ready for the 500+ mile adventure across New York State, and being able to impact the future of cancer research.

“It just feels amazing to do our part,” Harry says. “I like to imagine that as I train, I’m sending the strength of each pedal turn to someone who is fighting this battle.”

The pair are also leaving NYC for a cross country road trip to prepare for the Empire State Ride in May. They will be cycling across the U.S. to document their training and travels, as well as visit friends and family. Keep up with their adventures by following their Instagram.

During #ESR19, Harry and Kayla tackled 500+ miles and collectively raised $7,401 for cancer research. Here’s what the pair had to say after cycling across New York State.

“ESR was a life milestone event that we will never forget. We made so many friends and connections, we heard amazing stories of survivors and those who support them, and we pushed ourselves farther than we ever have before. It’s so hard to put it into words, because it was so many things. There were simple joys like having ice cream with your fellow riders, cruising the gorgeous scenery, or pulling into camp exhausted and having people cheering and supporting you. Then there were the big things, like connecting deeply with people about their experiences with cancer, the feeling of doing something to fight it, and passing a million dollars raised. Without exaggeration, one of the best weeks of our lives.”