Life Cycle — An account of the 2017 Empire State Ride 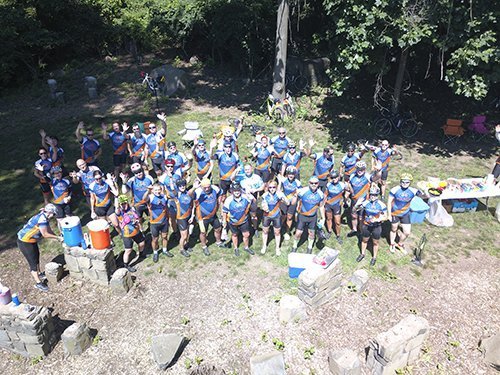 Peter Vollmer, a cycling enthusiast, usually cringes when people claim everything happens for a reason. But when the 62-year-old was on his way home after his cousin’s funeral, who lost his battle with throat cancer, he heard a radio commercial about the Empire State Ride that changed his life forever.

The Long Island resident decided to take on the 500+ mile adventure and ride the Empire State Ride in honor of all the people he knew whose lives were cut short by cancer. In particular, he decided to ride for his cousin Michael, his neighbor Jon and Graham, his best friend’s 5-year-old son — all of whom tragically lost the battle against cancer.

In a personal account of his day-to-day experience of the 2017 Empire State Ride, Peter beautifully illustrates what the fundraising cycling adventure is all about. He tells about the ups and downs, the splendor and challenges, the inspiration and the renewed appreciation of life that he experienced during his time on the Empire State Ride.

Among many anecdotes, personal narratives and reports from the ride, Peter begins his story by admitting concerns and initial doubts about his capability to finish the ride. He even made a contingency plan to rent a car and drive all the way down to Niagara Falls if all else failed! Ultimately, his will was stronger and like the old folk wisdom says, faith can move mountains.

His writings are full of the people and faces that made the Empire State Ride special. There’s Carlos, a nap enthusiast whose appearance on the first day had more of an escaped convict than a man on a mission of mercy. And Maria, a religious woman who Peter nicknamed “holy roller.” She would offer a prayer to any rider.

In one of his daily reports, he addresses the common misconception that we believe we have to hurry from Point A to B as quickly as possible. When Peter and his travel companion Jenn discover a national treasure — the Walkway-Over-The-Hudson-Bridge near Poughkeepsie — the two of them are simply transfixed and come to the realization that there is so much more to experience in-between Point A and B. Peter notes that if only we would try to experience the world as the children we once were we could live life a little more and enjoy it in all its fullness.

Peter describes each of the seven days in detail and in such an authentic way so that just by reading his stories, it almost feels like you are riding the Empire State Ride yourself.

Ultimately, Peter concludes that while he grows to understand life less and less, he also learns to live it more and more. The Empire State Ride helped him get a new perspective on life and a renewed appreciation for the precious gift we all share living in this world. For him, it was a rebirth on wheels.