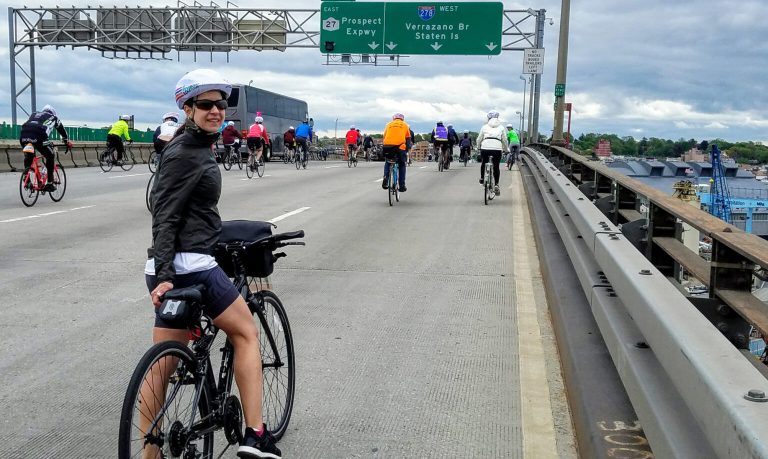 The 2020 Empire State Ride will be here before we know it! In addition to all the fundraising and training our amazing road warriors are doing to prepare for the upcoming challenge, they are also getting to know each other. We were able to catch up with a few of our new riders as well. Check out our Q&A with Kimberly.

You can take the gal out of New York State, but you can’t take New York State out of the gal.
Buffalo, NY native Kimberly Evering is looking forward to cycling across her home state this summer. Being from the Western New York area, she is more familiar with Roswell Park Comprehensive Cancer Center, which is ranked 14th out of 900 cancer hospitals in the United States by U.S. News & World Report, and the beneficiary of the Empire State Ride. When she saw her hometown friends posting about their experiences with another fundraiser for the cancer center, she decided to do some digging. A quick Google search introduced her to the Empire State Ride.
“I was on the fence about signing up because the mileage involved is very intimidating,” said Kimberly. “Then I went to a speaking engagement at the Smithsonian led by Katie Couric in which she passionately shared about the cancer battles her husband and sister lost, her fundraising efforts over the years, and her hopes for major advances in cures soon. I was so inspired by Katie that I signed up for the Empire State Ride the next day!”
So we asked her, what is your history as a cyclist? Have you ever done anything similar to the Empire State Ride?
Kimberly: “I grew up an only child in Buffalo, NY, and received my first bicycle with training wheels around the age of six. It was a liberating experience learning to ride! It was a healthy activity I could enjoy by myself or with my friends. I have done two non-traditional triathlons that included cycling up to 20 miles, but this is my first time doing a ride of this magnitude. It truly is a case of “go big or go home” for me! I’m a mix of nervous and excited. The Empire State Ride message boards on social media have been very helpful to a newbie like me because experienced riders have offered positive support and great tips from previous years.”

Now living in Fairfax, VA, and serving as a bike ambassador for Fairfax County, she also runs an adventure blog called Gal on the Go in her spare time. “I ride my bike all over town when possible instead of driving,” she said. “People have come to know me and sometimes shout, hey, Gal on the Go! I’m lucky to live in an area where we have access to many great trails with a variety of surface conditions that stretch for miles upon miles!” All those miles, plus the time in the saddle at the spin studio she joined, will be great practice for the 500+ mile adventure waiting for her this summer.
Training isn’t the only preparation necessary for the Empire State Ride. Part of what appealed to Kimberly when she was learning about our event was that “the fundraising efforts going toward all cancer research, not just one type.” She said “Six people in my life have or are currently battling cancer, including colon, skin, pancreatic, lung, and brain cancer. I thought to myself, suck it up, train to the best of your ability, and do the ride! These people are fighting for their lives; you are riding a bike, something you have done since you were a little girl.”
So how exactly is she fundraising? “I am fundraising through social media posts,” she said, “emphasizing the broad-range of cancer that the efforts benefit, and the fact that it’s a tax write-off. I also reached out to Liz, the owner of a local spin studio called New Trail Cycling Studio. She agreed to host a fundraising class for me on Friday, April 24, in which I can invite friends and family to a one-hour spin class for $25 in which all but a small admin percentage will go toward the ESR. I will also be reaching out to my new employer, Deloitte, who I learned, offers gift matching of some kind.”
And what is she looking to accomplish by raising funds and completing the ESR challenge?
“I hope to increase awareness about the work Roswell does and the importance of funding for making breakthroughs and furthering cancer research efforts. I hope seeing and following my ESR journey this summer through social media will inspire others to a call to action financially or physically by participating in similar events!”
How inspiring, Kimberly!
If you want to join Kimberly on the 2020 Empire State Ride, there’s still time! Register today and cross the finish line Kimberly and other cyclists from all over who are committed to changing the state of cancer research for good!