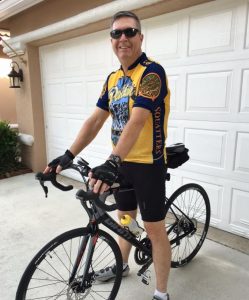 Alan is coming all the way from his hometown in Florida to take part in the Empire State Ride. Learn why he decided to make the trip north — and what he’s most looking forward to about the seven-day adventure.

I saw a “suggested page” show up on Facebook. I’m not sure why, but I am so glad it did!

I finally found a challenging ride that supports cancer research. I lost my father to cancer 33 years ago, and just lost my mother-in-law in April 2016. I am doing this to honor both of their legacies.

What is your history as a cyclist?

I completed eight marathons, including the Boston Marathon, and was training for my ninth when I blew out my hip during a training run. After having arthroscopic surgery in 2002 to correct the torn labrum and cartilage damage, I took up cycling as a form of physical therapy. I could never get back to the level of running I was accustomed to, but I got hooked on cycling.

Have you ever done anything similar to the Empire State Ride?

I am a 13-year veteran of the Bike MS: Breakaway to Key Largo, a two-day, 150-mile ride. I have not done anything to the extent of a seven-day ride of this distance and with these hills! South Florida is too flat!

I will be sending emails and letters to prior supporters of my MS rides. I will also be supported by my own personal donations and company matching of my donations.

First and foremost, I hope to raise much needed funds to help push cancer research further! Secondly, I hope to just be able to complete the ride and at the end, look upwards and say to my dad and mother-in-law, “thank you for pulling me to the finish!”

What are you most looking forward to about the ride?

From what I have read on Facebook and on the Empire State Ride website, the ride is not only about beautiful scenery and a great challenge, but it is about becoming family with my fellow riders who have the same hope and goal in mind — to help put an end to this terrible disease. I am looking forward to meeting new friends and knowing that I have helped make a difference in the lives of those suffering from cancer.