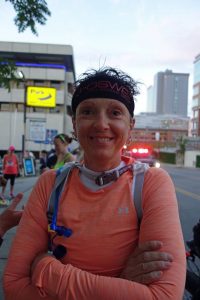 My mother was diagnosed with breast cancer in June 2012. At the time, my relatives and I decided to run the Dirty Girl Mud Run. She cheered for us under her umbrella, surrounded by rain, wind and thunder. Her smile and tears at the finish line were enough for me. I did over 44 events in her honor.

In June 2015, I was diagnosed with breast cancer. The night before my double mastectomy, I rappelled the Niagara Casino. One week after surgery, I completed the Tough Mudder Mud Run. Five days after 33 radiation treatments, I completed a marathon. To date, I have completed over 150 events, including include 5Ks, 10Ks, half marathons, a marathon, and mud runs.

This will be the first week-long ride I have done, but I have done other shorter rides.

I belong to the Slow Roll of Buffalo. We do a 10-13 mile bike ride every Monday. I did a triathlon last year in which we kayaked, biked, and ran. I practiced 15-20 miles daily preparing for it. This past year, I also did a fun 40-mile “Fire & Ice Cream Ride” through Buffalo, where we stopped at fire stations for ice cream breaks.