Don’t Forget to Say Thank You 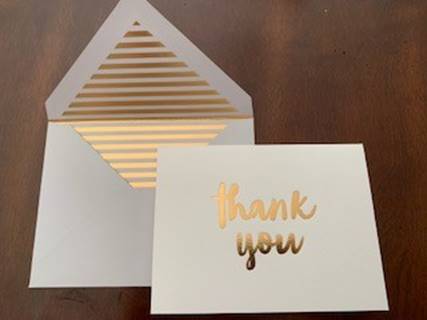 Thanking your donors is a crucial step in becoming a successful fundraiser. According to Network for Good, appreciation is the foundation of donor retention, and communicating gratitude assures donors that you value them as an important part of your team. To keep those donors coming back, you need to make sure they know and feel how much you value not only their donation but also their support of you.
So, how do you thank your donors? It’s the perfect time to get a little bit creative. Take #ESR19 rider Jason M. as an example. He creates personalized, handwritten cards that he seals with wax and sends to every single one of his donors. This year as a first-time rider, Jason had 65 donors who helped him raise $7,731 for cancer research.

To start, Jason gathers his supplies (and graciously provided the out-of-pocket costs):

Total Cost: $195.97 (or about $3 per donor)
Next, he creates an Excel spreadsheet and captures all relevant data needed to thank his donors (name, address, email, donation amount).
Then the fun really begins – handwriting the letters! To help alleviate some of the stress, Jason breaks up his writing sessions over several nights. He said he usually does it for about an hour and a half each night. To thank 65 donors, it took him about 7-8 hours. While that may seem like a big commitment, Jason recommends listening to some tunes while drinking a delicious beverage of your choice.
Once he is finished writing, he includes a collage of pictures from his time on the road, seals each letter with wax and places his custom ESR stamp onto the envelope.

On top of the letters, Jason also publishes a thank-you to his Facebook wall for each donor. He makes sure that each post is set to public so that anyone on Facebook can view and share it.
Why all this effort? Because it’s the right thing to do and it’s a statement, according to Jason.
“My goal is for the donor to feel like I went above and beyond to say thank you,” he said. “I want the donor to correlate the level of commitment I put into saying thank you with how I feel about the mission of the team that rides ESR.”
Jason’s advice to any fellow rider who’s struggling to find a way to thank their donors is simple – put yourself in your donor’s shoes.
“It’s crowded out there on social media … so everyone is competing for a finite amount of donors and their empathy,” he said. “What would make you want to repeat donate? What could you do now that will make you memorable? A phone call versus an email or text. Time spent with that person. A barbeque for all of your donors.
“So my advice is be memorable and genuine in your approach.”