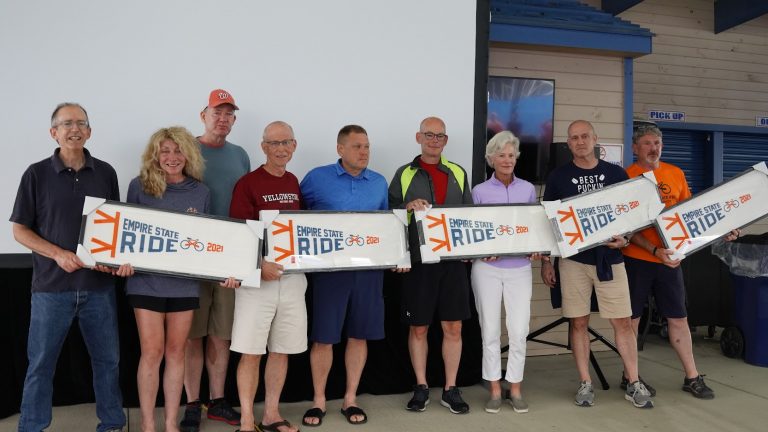 Every year, Empire State Ride brings in funds that are dedicated toward Roswell Park’s mission to continue to uncover better ways to prevent, diagnose and treat all kinds of cancers. Road warriors pave the way for lifechanging new treatments, groundbreaking clinical trials and innovative research and discoveries.

Roswell Park is pushing to eliminate cancer’s grip on humanity every day. Over the years, we’ve seen the genesis of groundbreaking and lifesaving advances right here in Buffalo. Those new treatments and findings all have their start with new questions and ideas from Roswell Park scientists.

That’s where Roswell Park’s Scientific Advisory Committee (SAC) comes in. Researchers submit their project proposals, all looking to continue to learn more about cancer. Through a competitive and rigorous process, these investigators and their work have been funded. These grants are made possible by the generosity of Roswell Park fundraisers and their donors, without whom, these projects could not get off the ground and make their marks on cancer as we know it.

From Fundraising to research

In 2022, the funds raised by the 2021 top Excelsior fundraisers (those who raised $20,000 or more) for Empire State Ride were put toward one project in particular. These road warriors have empowered Roswell Park to investigate racial health disparities for African American men with prostate cancer in a project led by Anna Woloszynska, PhD, Roswell Park Associate Professor of Oncology in the Department of Pharmacology & Therapeutics.

In Western New York, African American men are more likely than other men to have prostate cancer, more likely to have aggressive forms and more likely to lose their battle. Dr. Woloszynska’s research will take a deeper look at these patients’ epigenetic age — a way of determining age not in terms of one’s chronological age or time on Earth, but their biological age, taking into account disease risks and exposures — to determine if their epigenetic age is accelerated and if that contributes to early onset disease in patients younger than 55 years old. The findings will lay the groundwork for discoveries that will hopefully identify higher risk individuals and save more lives, reducing and ultimately eliminating the existing racial health disparity.

This work is made possible by the top ESR 2021 Excelsior fundraisers and their donors:

Because of these riders and everyone who supported them, Roswell Park will be able to gain a deeper understanding of cancer and seek to bridge gaps in healthcare, providing the best possible treatment for every patient. Thanks to road warriors and every person who contributes to Empire State Ride, research like this can continue to move forward, guiding us in the best ways to fight cancer.

In the same way, the 2022 top fundraisers are going to make a direct impact on emerging cancer research at Roswell Park. Keep an eye out for those fundraisers and the work their fundraising will support.