BINGO: Get Inspired for Your Next Virtual Fundraiser 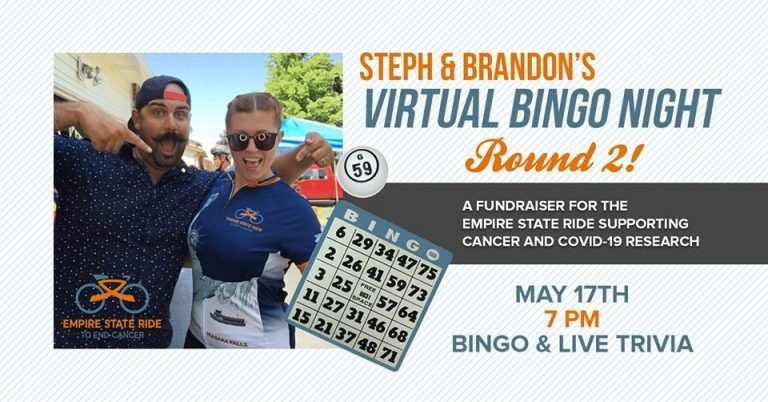 COVID-19 may have stopped us from going to work, hugging our loved ones, and enjoying a meal at our favorite restaurants, but we got creative. We figured out new ways to connect with coworkers from home, send love to our families, and support local businesses.

Now it’s time to get creative with our fundraising to support cancer patients. Not even COVID-19 can stop cancer, and we need to continue to raise funds and make an impact on the future of cancer research, even if we can’t be together on the road.

Looking for inspiration? We want to introduce you to two of our road warriors, Stephanie and Brandon Zarbo, whose passion and dedication to the cause helped them raise $1,200 during just one virtual event!

Stephanie and Brandon hosted a virtual bingo night in early May where they had 45 players, sold 250 bingo cards, and attracted over 400 viewers. “It was a lot of fun for us and gave us something to do while we’re cooped up,” Stephanie told us.

Their first one was so successful, they scheduled a part two for May 17 where they hoped to sell 500 cards!

We talked to Stephanie and Brandon about how they planned this event and made it as successful as it was. Take a look:

Where did the idea come from?
As the COVID situation began playing out, it was becoming clear in early April that our planned fundraising events in late April were not going to be able to happen. On top of that, we knew it would be very challenging to try to raise money as we know people are struggling financially. But, we also knew how much friends and family were in need of some fun distraction and we had been wanting to organize some type of virtual game night since this all started. There are lots of online group game options available now, but not anything large scale. Bingo came to my mind because we wouldn’t have to get everyone on a call, and I could easily distribute playing cards via email. We decided the prize should be dinner deliveries from a local restaurant to add another layer of support for our community.

Your viewers/participants – were they local? How far was your reach?
Most viewers were from the area, but we had friends and family playing from everywhere! I think some of the farthest were our friends in Salt Lake City and South Carolina, and some cousins in Northern Ontario!

What platform did you do it on?
We used Facebook Live and that worked out well. Most people have a Facebook account, even if they don’t use it often, so it was easy to get everyone watching in the same place.

How did you get the bingo cards? How did you set it up?
When I first had the idea, I started researching virtual bingo options. There’s a great site called freebingocards.com that made it very easy. From there, as donations came in, I sent out playing cards via email to players with instructions for how to play. We sold out of game cards so we also decided to add Live Trivia in between rounds to add a little more fun, as well as another chance to win prizes. Players called in via Houseparty and we streamed them in our live video. In terms of the live setup, we had started planning assuming that we would just set up a phone and go live. But Brandon and I are video production professionals and after being out of work for 6 weeks, it felt like the right time to flex our production muscles. We had a two camera live stream and also included the live call-ins. It was a lot of moving parts, but it went really well for our first time and so much fun!
You can check out Stephanie and Brandon’s live stream of their first virtual bingo here: https://www.facebook.com/stephanie.e.brochey/videos/10100889335656481/

Great job Stephanie and Brandon! We are so grateful to have your dedication and support.